Posted on April 4, 2013 by frontrangescribbles — 10 Comments

Tell us about a sensation — a taste, a smell, a piece of music — that transports you back to childhood.

Fall of 1983.  I was with what was half of my high school class, I want to a small high school, and we were playing floor hockey at a church gym.  It was a Friday night.  We were killing time because we were really waiting for the new Van Halen album to debut on KSHE 95.  The album was 1984.  Once the radio station started playing the album we all stopped, sat around the radio and just spent the next hour listening to the album.  We hardly talked we just wanted to hear the album.  Once the album was done everyone started talking about wanting to see Van Halen when they stopped in St. Louis, or critiquing the songs.   We were all pumped and couldn’t wait for the album to be available in stores. 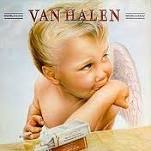 To this day, when ever I hear a song from that album, I am immediately transported back to that night with my friends listening to the debut of the album on the radio.

Speaking of music the debut of my radio program on blogtalkradio will occur Saturday.  Details will be posted here on Friday.  I hope you will listen to the show on Saturday or the archived version.

10 comments on “Daily Prompt: The Transporter”