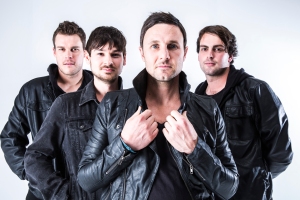 Arriving to US airwaves from down under the group Jefferson, out of Sydney, have released the single “You Are the Love” from their album All The Love In The World.

According to their bio:

“In 2006 Geoff Rana left Australia and headed to Europe, instigating a writing spree of material that would later become The Jefferson’s first batch of recordings. Upon returning to Australia in 2007 Geoff met Jared King (bass guitar), Andy Horvath (drums) and Daniel Van der Merwe (guitar) whilst studying Contemporary Music Performance at The Australian Institute of Music (AIM). In 2010 The Jefferson recorded a collection of songs under the moniker “Safe Return To Earth” with producer Craig Porteils. The band has toured extensively in the U.S since 2010 after being invited and attending many music conferences, such as SXSW Austin Texas, CMJ New York, Next Big Nashville.”

If this song does not hit the American airwaves then there is something wrong with commercial radio.

I will air “You Are the Love” this Sunday on Front Range Radio, the show can be heard at 9pm eastern on Party934.com

Tagged with: Australia, Front Range Radio, party934, The Jefferson, You Are the Love
Posted in Music