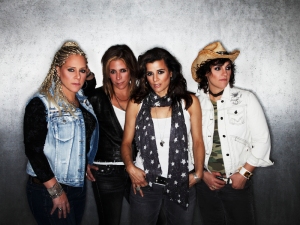 Antigone Rising’s latest EP, Whiskey & Wine – Vol. 1 was released March 25, 2014. The female Alt-Country, Rock group from New York was founded by sisters Kristen Ellis-Henderson and Cathy Henderson they are joined by Dena Tauriello and Nini Camps. Vol. 1 will be followed later this year by Whiskey & Wine – Vol. 2, due out October 28, 2014

Their first independent fan-funded CD (2000’s Rock Album) raised ten thousand dollars via checks through snail mail before the internet ever kicked into high gear. Their fan funded effort for 23 Red released in 2011, raised quadruple that number. Those loyal fans and the soaring three-part harmonies are what eventually caught music industry icon Jason Flom’s attention. He signed the group to Warner Music Group’s Lava Records in 2004. Shortly thereafter, he worked a deal with Starbucks Hear Music, and the band’s first major label release hit Starbucks shelves in May 2005. The acoustic based live album, From The Ground Up, which included the hit single “Don’t Look Back,” co-written with Grammy award-winning songwriter Rob Thomas (Matchbox Twenty). A video for the song played on CMT and VH-1 throughout the summer and fall of 2005, and a half hour documentary special about the band aired on VH-1. Appearances on The Today Show and The Tonight Show pushed sales over ten thousand units a week. Tour dates alongside The Rolling Stones, Aerosmith, The Allman Brothers Band, Joan Jett and The Blackhearts and Rob Thomas followed. Jason Flom’s departure from Warner Music Group in 2006 left the band’s major label future uncertain. The ladies left Lava Records on their own terms with an ever-growing loyal fan base strongly intact.

August 2011, saw the release of the full length album 23 Red, With the money raised from Kickstarter, the band was able to create their own Rising Shine record label, and with the help of Joan Jett’s Blackheart Records Group, a distribution deal was secured.