Home › Politics › And the winner is… none of the above

And the winner is… none of the above

Lucky me I live in what is termed a “battle ground state” .  What does this mean?  Well it means I get to watch lots of commercials for both of the candidates, thank God for DVRs and fast forwarding thru the commercials .  It means the candidates visit my state more frequently, yeah more traffic tie ups and road closures when Obama is in town, yippee.  It means my local stations go gaga when one of the candidates do show up in town. 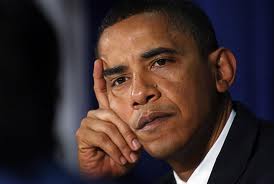 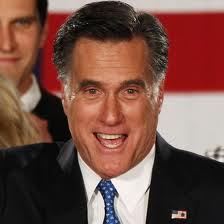 This election like most elections is a choice between liar number one and liar number two.  I’m not going to get into which candidate’s policies will or will not help the country, create more jobs, improve the economy, or put a chicken in every pot.  Because lets face it neither man alone can do any of them.  Nor can Congress alone do any of them.  It will take both branches of the government working together, but that is for another day.

Like every election cycle, I would like a box to select “none of the above”.  I want to show both parties that the person they selected is not acceptable to me.  Sure I could stay home and not vote, but that is not letting the parties know how I feel.  I want to demonstrate loud and clear to both parties by selecting the box “none of the above” that they need to go back to the drawing board.  If, during one Presidential election cycle, we had that chance to mark “none of the above”, it would be a bigger movement than the Tea Party, than the Civil Rights marches, the woman’s suffrage protest.  It could speak volumes to the parties, we don’t like your candidate.  Come on America, we sent men to the moon, landed a rover on Mars, created Sponge Bob Square Pants, made Justine Bieber a star, OK maybe skip the Justin Bieber thing, but still can’t we do better than these two? 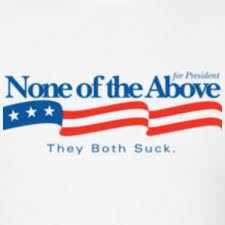 Now I know many will say, hey the parties only selected the candidate that won the primaries and you had your chance during the primaries to pick someone else.  Yes that is true to some degree but the primary system is also a flawed system.  Lets face it some of the brightest people don’t run for office because of the amount of funding raising it requires, the media, and the lack of true debate on issues, something beyond a 30 second sound bite.  No candidate in today’s age will really say anything substantial, it’s all pandering to one base or another.

I am thankful that I do live in a country where I have the opportunity to vote for my leader, unlike citizens in some other countries like say China on North Korea.  I am even more thankful to the men and women in the military who risk their lives every day so I can vote every four years in November, to them we can never say thank you enough.  Since I do have to vote for someone in November and I can’t select “none of the above”, I think I will just write in a candidate and it will be…